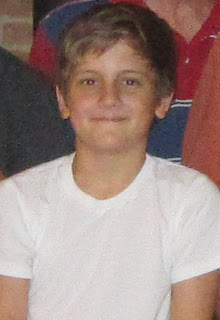 This weekend we had a great visit with our nieces and nephews from Texas. They were in town for their grandmother's funeral. We don't get to see them too often due to the distance between us, but for the kids it was like they saw each other every weekend. They get along so well, and we had a fantastic time catching up with the adults around a table full of pizzas. The photo above is from the last family photo taken before we all left on Friday.

On the last hour of their 19 hour drive home, they were struck head on, by a driver who should not have been on the road. The van filled with 10 family members flipped over several times. Our brother-in-law was thrown 25 feet and sustained several broken bones. Our eleven-year-old nephew, Samuel, was also thrown from the vehicle and suffered massive head trauma. He died instantly.

My first reaction was, "that's not possible, we just saw them on Friday." Silly, isn't it? Of course that doesn't matter. But, sometimes you just get accustomed to "knowing" when someone is going to die. They're sick. They have cancer. They're in the hospital. They're old.

Not an eleven-year-old boy.
Not someone with a personality beyond his years.
Not such a talented artist.
Not a boy who, on Friday, put his arm around his 2 year-old cousin and told her, "I love you."
Not a son.
Not a brother.
Not someone so loved.

So today we give our family extra hugs, extra kisses, extra tolerance for behavior that does not fall within our old vision of what's proper. Does it really matter that my child is in my face as I'm trying to type on the computer? Maybe not, maybe that's a sign that I need to stop what I'm doing and make some room for quality time with him. It's tough to balance priorities, but I think there is a lesson to be learned here. You hear it so often, "life is short." But do we really understand what that means? Do we really have that mantra front-and-center as we go about our lives? Do we need to wait for something tragic to happen in order to understand this and act accordingly?

As heartbreaking as this is, we are so incredibly thankful that the other 9 family members are, or will be, physically OK. It could have been much worse. And for that we will say a special prayer next week at Thanksgiving. 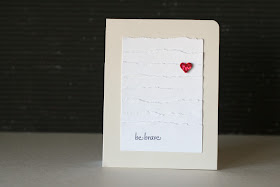 I couldn't bear to send them a sympathy card. How could I send a sympathy card for someone so young? It might not make sense, but it just wasn't what I wanted to say. They know of my sympathy. What I chose to do instead was send a card with a "be brave" sentiment. Because that's what I really wanted to tell them. They have such a long and painful road ahead of them, and they will need to be brave to help each other on this journey. So that is what my prayers are for them, to be brave.

Thanks so much for looking, and for any prayers you may have for Samuel and his family.
-Kelly

PS, I know as card makers sometimes we end up with more cards than occasions to send them. If that's you, and you would like to send one of those cards to Samuel's parents, feel free to contact me and I'll give you their address.