In an amazing reminder that "life goes on," we learned of a precious son who was born in our family on the same day as Samuel's car accident. It's difficult to switch gears, but at the same time a welcome distraction. 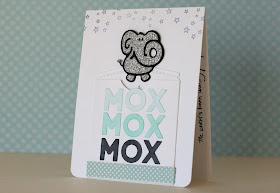 His name is Mox. Isn't that awesome? So simple, yet so different. As new parents, I thought they would get a kick out of seeing their first-born son's name in print, so I added it in triplicate to the front of the card. 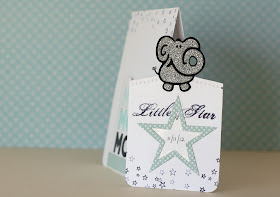 I like the idea of a faux pocket from the MIM technique explained this week. The top of the tag is die cut by running the Banner Builders Borders die part of the way through (with a cardboard shim to stop it before it cut the border off). The medium Papertrey star is cut out of the large Papertrey star to get the outline effect. In the middle is the birth date, and some really hard-to-see glitter. The stars on the bottom of the tag match the stars on the top of the card. 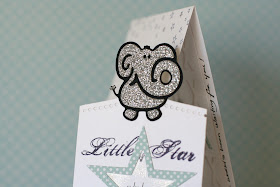 I resisted my hoarding tendencies and used my ridiculously thick American Crafts glitter paper to make a sparkling elephant. It's the Cuttle Kids elephant, one of my first die cuts! 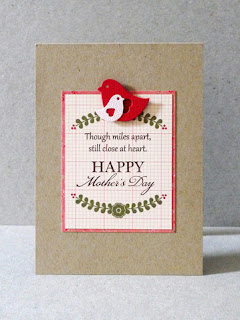 Adding the elephant to the top of the tag was inspired by this amazing card at CASE Study by Angeline Yong. 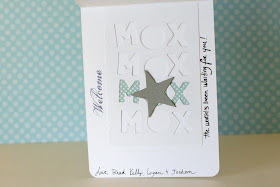 I've been challenging myself lately to use my scraps on the inside of the card. I figure since nothing much is usually expected there, anything other than your message may be a pleasant surprise. In this case I grabbed the negative die cut paper out of the trash. Definitely not something I created with the intention of using, hence the very uneven letters. But, I think that's why I like it. It's definitely more difficult for me to make an "artsy" card than a CAS card, so sometimes I have to rely on unintended elements.

Entering this in the CAS-ual Fridays challenge to use blues (admittedly not a tough challenge for baby boy cards!)

Thanks for looking!
-Kelly