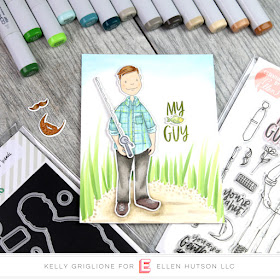 Hi Folks! With as popular at the Essentials by Ellen Leading Ladies by Brandi Kincaid have been, you knew it was only a matter of time before a Leading Gentleman came onto the scene! And what a guy he is, with a ton of "guy accessories" to go with him (which, btw, are small enough in scale to go with my favorite All Inside Bear). Just perfect for Father's Day! 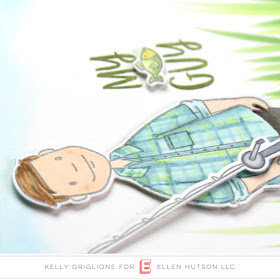 Let's talk about his plaid shirt ... I thought for sure there was no way that it would actually work out. And in fact, I left him on my desk overnight and almost threw him out the next morning. But then I had an idea to add shading to his sides even though I had already made the plaid. Right away I noticed that adding a color on top of the plaid helped even things out and look less stark. My next step was to go over the entire shirt with a colorless marker, which gives it a worn, flannel look. Super happy that I was able to save him! 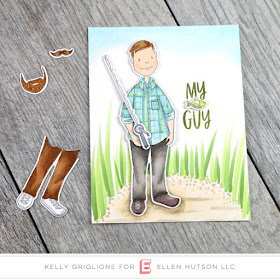 The same could not be said for his pants. I realized that with the dark brown color, all the attention was going to his pants. So to save the plaid shirt, I simply cut off his pants! His top is adhered onto a full, uncolored die cut and I got a second chance to color gray pants for him. I'm realizing I should have probably gone for a third try, as I over-bended the gray and it looks more like he's wearing sweat pants instead of khakis, hahaha! 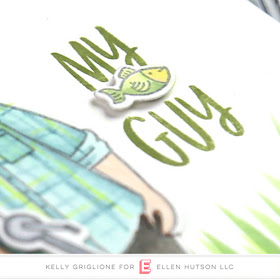 I don't always think corresponding dies are necessary for a stamp set, but I must say they sure do come in handy for a set like this, where there are a lot of small, different pieces. For the sentiment I split up the two words and popped a fish in-between.

The set also comes with facial hair! : ) I created a little fashion shoot so you can see his transformed looks.

He does look more rugged with the full facial hair. I've seen several mustaches before, but don't recall many stamp sets offering the beard and mustache option. Nice to have! 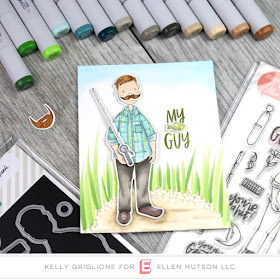 Finally, I was surprised with how the background turned out, as that is definitely going outside my comfort zone. A couple strokes of grass, a sandy alcove, and pebbles around the perimeter give this fisherman a place to hang out. Seeing everyone's amazing background scenes on Instagram has definitely inspired me to try this out ... my card-making New year's resolution.

This set, along with the Little Lady and all the other January releases, are on sale now!

Thanks so much for stopping by!
-Kelly