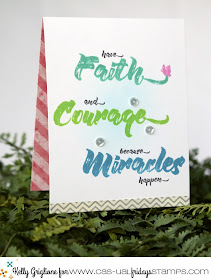 Hi Folks! We've got our last CAS-ual Fridays stamp set being released today, and this one is packed with large, brush-stroke words centering on encouraging thoughts. This card uses quite a few of them, which is nice because there are many different combinations for you to create your own custom sentiment. A tiny pink butterfly from yesterday's stamp set called Be has just landed on "Faith". 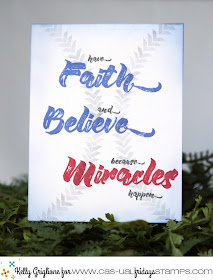 I wanted to see if I could make a card that had a message other than encouragement, specifically one using the "miracles" sentiment. While I was dropping my youngest off at religious ed, it hit me. A perfect card for any one of the numerous Chicago Cubs baseball fans in my family!! For those of you lucky enough to not be burdened by the Cubs' 108-year world series curse, being a Cubs fan has been a frustrating experience. There is no fan alive on this Earth who remembers the last time the Chicago Cubs won the world series. There are any number of incidents that make up the Cubs' curse landscape - black cats, billy goats, and poor Steve Bartman who reached for a foul ball in ill-fated game six more than a decade ago (who I used to work with, incidentally). The word "miracle" is often associated with the Cubs doing well in baseball, and this card is more of a humorous thinking-of-you card for any Cubs fan. 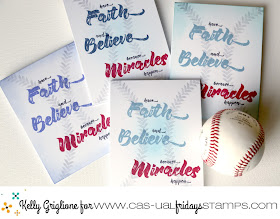 It's practically the same as the first card, on purpose, except I've swapped out "courage" for "believe" to make it more appropriate. Another difference is instead of the pink butterfly for an embellishment, we have a stitched baseball background. I was excited to make the stitching from the triple arrow stamp used multiple times along two circular, penciled lines.

So there you have it! This set works for those needing encouragement, and for Cubs fans! 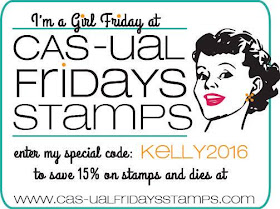 Check out the rest of the Ink Squad to see more awesome projects with these stamps. Feel free to use my code "KELLY2016" which will save you 15% off any purchases at CAS-ual Fridays Stamps.

Thanks for looking!
-Kelly