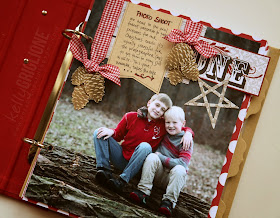 Yay, my first honest to goodness December Daily page is complete! I feel part of the DD club now : ) Let's see how long I can keep this going!! 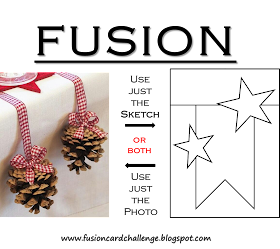 This page is inspired by the photo and the sketch in the current Fusion Challenge. 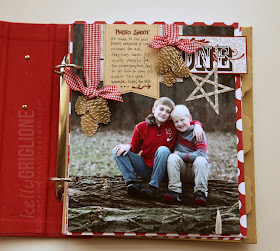 It tells the story of how it's always stressful taking formal pictures of the boys because they don't sit still and have difficulty smiling at the same time. This year really took the cake, however, which you'll see when you turn the page ... 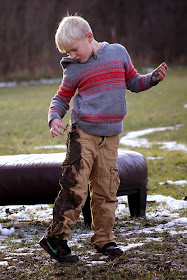 Yep, it happened. Logan actually PUSHED Jackson forward. Right into the biggest section of mud in the whole forest preserve, I'm sure. There really wasn't a speck of clean pants in that whole mess. When asked what on Earth he was thinking, Logan replied that Jackson was moving too slowly. We took a break for a snowball fight and I guess afterwards Jackson didn't return to the ottoman quickly enough. 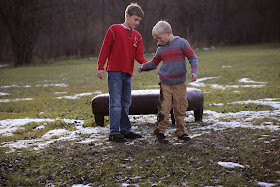 I can't believe I had my wits about me and managed to take a few pictures before I started screaming and carrying on. I must have yelled pretty loudly because Jackson didn't even complain at all to Logan ... he felt I had expressed it all. Unbelievably there were another two pairs of pants for Jackson in the car since, crazy as this may sound, I was thinking about changing his pants if we took pictures on my gray/green bean bag instead of the brown leather ottoman (the warm tan of his pants didn't look right on the gray/green ... I know, way too detailed. It's why I don't get a lot of things done!) 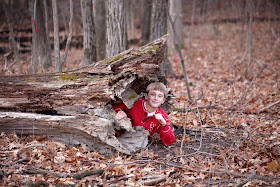 I ended up laughing about it EVENTUALLY, and Logan felt so bad that he was exceedingly cooperative for the rest of the photo shoot. Including climbing into a log for a photo op (Jackson refused on account of any mysterious animals that might be in there). It's a memory, that's for sure! 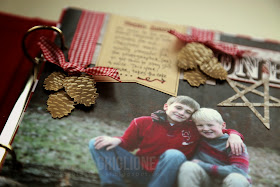 Back to the page ... so excited to have pine cones just like the inspiration photo (these are from Winnie & Walter), and that they go with the photo of the kids in the woods. Perfect match!


Here are some fabulous cards by our design team!

Winners: Will be chosen by all of our teammates in two weeks. We each will choose one favorite. The winners will be announced at 4 am (PST) in two weeks!


Thanks for looking!
-Kelly
Kelly Griglione at 8:00 AM
Share