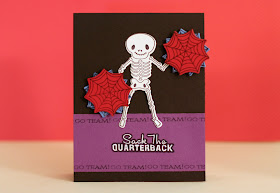 OK, so this may be a tad on the quirky side, but I had a little smile on my face making this skeleton cheerleader tonight. He's got SPIDER WEBS for pom-poms. I wish I could take credit for it, but I can't. It was my turn to host the neighborhood playdate today and I had all the 3rd grade girls doing crafts with the new Mr. Bones PTI set I got in the mail yesterday. Everyone really liked the skeleton, and I thought it would be fun to cut two of them holding hands paper-doll-style. The girls put a third skeleton on top of the original two to make a triangle. "Oh, like those water ski shows?" I asked. "No, like cheerleaders!" they exclaimed. Indeed, they did look like cheerleaders. Then one of the girls put a spider web over the hand for a pom-pom. Brilliant! Because what else would a skeleton cheer with, right? I added a second, off-set spider web behind the first to make it a little rounder like a pom-pom would be, but I think you still get the spider web picture. I used a white gel pen to fill in the middle of the letters in the "Sack The Quarterback" sentiment to tie in with the skeleton.

She's inspired by the colors at Play Date Cafe: 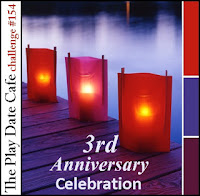 And CASual Friday's off the edge challenge.

ETA: This morning when I saw her again I realized what was off ... "she" didn't look like a girl. So I added a bow to her head. 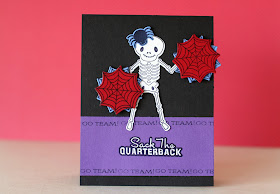 A spider bow, of course! It actually has the same shape as a bow, with the spider body where the knot would be, and the curved legs where the loops would be.

This card is inspired by the MIM challenge to use a negative and positive die cut. 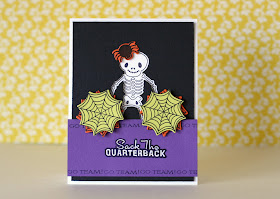 More traditional Halloween colors on this one. She seems to have a hunchback, forward leaning stance, like when a cheerleader bends over to put her pom-poms on her knees. 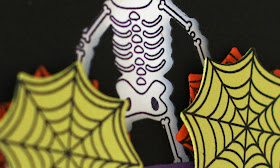 The skeleton is in the negative die cut, and of course the pom-poms are a positive die cut. Makes for some nice dimension. Great technique!


Thanks for looking!
-Kelly